The richly red ruby has been one of the most prized gemstones for millennia. Since ancient times, the ruby has been held in the highest regard, alongside other precious stones like sapphires, emeralds, amethysts, and diamonds. Luckily for those with July birthdays, the ruby is the July birthstone, which means July babies have one of the world’s most treasured gems as their signature stone. To celebrate the storied history and incredible beauty of the ruby, we’ve created this in-depth look at the ruby. Read on to learn more about the ruby’s origins, history, and value, as well as about some of the world’s most famous rubies.

The Origins of the Ruby

Where do rubies come from? Like diamonds, rubies form over many thousands of years in the earth’s crust. Rubies are a variety of the mineral corundum (aluminum oxide), which is the same material sapphires are composed of. Like sapphires, rubies form in the earth when corundum is exposed to tremendous heat and pressure. What makes rubies different from sapphires, however, is their spectacular color, which can range from pink to all shades of red. Rubies get their beautiful color from being exposed to chromium during formation. Rubies are named for their red color. “Ruby” comes from the latin word “ruber,” which means red.

Rubies have been found in numerous locations around the world. Many of the world’s finest and largest rubies come from mines in Mogok, Myanmar (Burma). Other common sources of extremely high quality rubies include other cities in Myanmar, the Himalayas, and Vietnam. Fine rubies have also been found in Sri Lanka, Mozambique, Thailand, Cambodia, Afghanistan, and Australia.

The History of the Ruby

We know that rubies have been loved for thousands of years because these gems were mentioned in several ancient texts. We have a written record of rubies in one of the oldest texts in the world, The Bible. Rubies are mentioned not once, but four times in the Bible, in which they’re associated with beauty and wisdom. Rubies are also mentioned in the famous ancient text Natural History, written by the Roman scholar Pliny. In Natural History, Pliny describes the ruby’s impressive hardness and density.

Since ancient times, there have been many myths surrounding rubies. In some ancient cultures, people thought that rubies were created by a bolt of lighting. In ancient India, people believed that rubies could solve interpersonal issues and allow the wearer to obtain peace with their enemies. Ancient Hindus believed that offering a high quality ruby to the god Krishna would lead to rebirth as a powerful emperor. In ancient Burma, warriors went into battle with rubies imbedded in their skin to make them invincible in battle.

Myths about the power of ruby gemstones continued into the Middle Ages. In medieval Europe, royals and members of the upper class desired rubies for their beauty and because of legends about their powerful properties. Medieval Europeans believed that rubies promoted good health, good fortune, success in love, and wisdom. They also believed that wearing ruby jewelry would draw wealth to the owner.

The Value of Rubies

How valuable an individual ruby is depends on a number of factors. One quality that greatly affects the value of a ruby is its color. If a ruby has a richer, deeper red hue, it’s considered much more valuable. According to the experts at the GIA, the finest color rubies have “a pure, vibrant red to slightly purplish color.” The value of a ruby is also affected by its 4Cs (cut, color, clarity, and carat). Rubies will go up dramatically in price as their carat weight rises and if they have a deeper color. They’re also considered more valuable if they have a superior cut and if they have a lower presence of inclusions. Due to the way rubies form, it’s extraordinarily rare to find a ruby with no inclusions. So rubies with few inclusions, inclusions that are hard to spot, or inclusions that create the pleasing “star effect” are very valuable.

There are many rubies that have risen to fame due to their exceptional size and quality, or sometimes due to who owned the ruby.

The most expensive ruby ever sold is called the Burmese Sunrise Ruby. This ruby set a world record when it sold for a staggering $30.42 million at a Sotheby’s auction in Geneva. This ruby weighs in at an impressive 25.59 carats and is of exceptional quality. It has an excellently proportioned cut, very fine purity, and a deep red color known as “pigeon’s blood” among jewelers.

Another famous ruby is The Hope Ruby. This cushion cut ruby is actually even larger than the Burmese Sunrise ruby, with a carat weight of 32.08. This ruby is set in a beautiful engagement ring that is set with two trapezoid shaped white diamonds along the sides of the ruby. This ruby features the famous pigeon blood color, though it is considered somewhat less valuable than the Burmese Sunrise Ruby due to its clarity and cut. Still, the Hope Ruby is extremely valuable. It last sold for $6.74 million.

Another entry in our famous rubies list is the Burmese Ruby Tiara. This tiara is famous for its craftsmanship, design, its many fine rubies, and its owner, Queen Elizabeth. When Queen Elizabeth was still Princess Elizabeth, she received a dazzling array of high quality rubies as a wedding gift from the country of Burma. In the 1970s, she had her Burmese Ruby Tiara created as a home for the 96 rubies she received and named the tiara in honor of the gift from the Burmese people.

Queen Elizabeth isn’t the only famous figure who adores rubies. Famously, actress and Hollywood legend Elizabeth Taylor loved rubies and had many in her vast jewelry collection. In 2011, one of the largest rubies from her collection, an 8.24 carat ruby, sold at auction for $4.2 million. Other celebrity fans of rubies include Victoria Beckham, Eva Longoria, Katy Perry, and Jessica Simpson, who all wear ruby engagement rings. Jessica Simpson’s engagement ring center stone happens to be her birthstone, as she was born on July 10th. Today, rubies are also a popular choice for celebrities on the red carpet. Rihanna, Deepika Padukone, Gwyneth Paltrow, Anna Kendrick, Jane Fonda, and Helen Mirren have all been spotted wearing rubies on the red carpet.

The Ultimate Guide to Diamond Hoops

The Ultimate Guide to Diamond Hoops 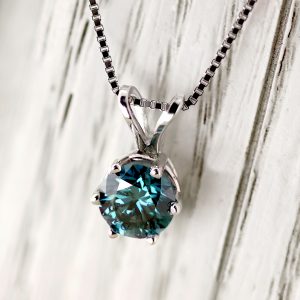 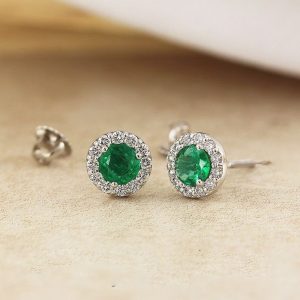 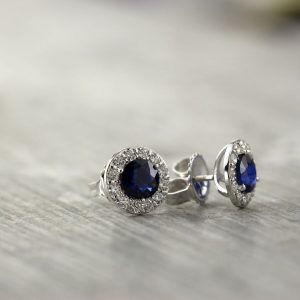 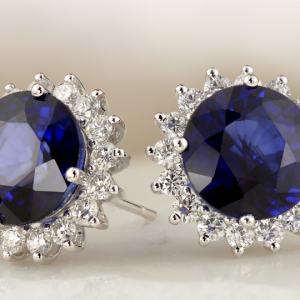 The Meaning Behind the Gemstones You Wear 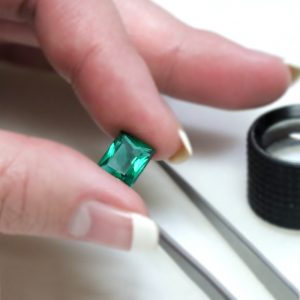 Top Diamond Earrings for Him: Most Popular Men’s Studs 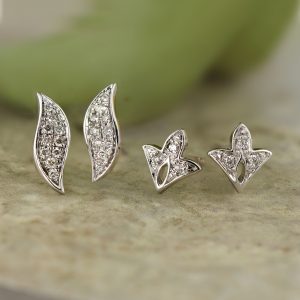 Trending Jewelry Accessories For The Bride